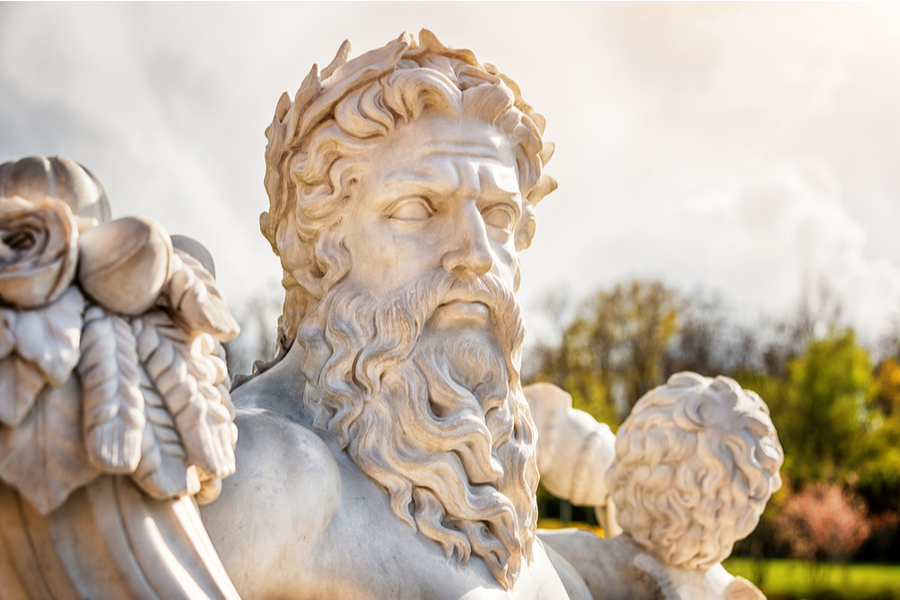 As we begin our work with Zeus, Poseidon, and Hades, it is important to also differentiate the realms in which they oversee. We must better understand the role of different aspects of masculinity through these archetypal figures. To do this, we have to also take the time to understand the aspects or places psychologically suited for each. Without a conscious relationship with the realms of psychological life, we may be swimming in the undifferentiated mass confusion of an unconscious psyche. Should we take the time to raise to candlelight the realms and rulers personified in the Greek myths, we may observe in intimate detail the curvatures of the masculine form.

The Wise and Strong Mothering Rhea

After Zeus and Rhea trick Saturn and the gods have returned, Zeus assumes the rightful position as king over his many siblings. For Zeus, conquering the father and rescuing the siblings entitles him to the highest position among them. Through strength and power on the one hand, Zeus claimed his throne. However, we also have to consider the wise and strong mothering of Rhea. Rhea was the protector of Zeus in infancy. She guarded his innocence day and night until the day he confronted Saturn. This is an important and very common phenomenon in the life of strong Zeusian men. When mother was protective, men will often exude an unparalleled and unwavering conviction in word and action. We might say that Zeus was stubborn, but also most worthy. He is less consumed by father and more secure in the womb-like preservation provided by mother.

The Rightful Ruler of Our Purest Virtues

I want to consider the significance of preserved and protected innocence and the rightful overseer of our purest, highest, and most heavenly virtues. Zeus is rightly the ruler here. He possesses both a secure childlikeness as well as the power and strength to lead from it. Such amplifications beckon us to ask good questions of our own Olympian realms and rulers. Who holds the reigns of our Olympian worlds? Do we place the highest values in the hands of wounded and fearful fathers? Like Saturn, do we swallow life down and remove ourselves? Or do we entrust these values to the strength of Zeus? Of course, we come in and out of metaphor and literalism here. Zeus is figurative – a clay formation of an important aspiration within and without. As fathers, again both within and without, how do we exemplify or woefully fall short of Zeus?

The Importance of an Individuation Process

It’s important to point out what happens when the role of Zeus is already taken. This may from father, grandfather, mother, teacher, or even therapist. If Zeus belongs to others we may never rightfully oversee the psychological life within us. To put it another way, if Zeus is not, in part, a way of thinking for ourselves because his energy is projected elsewhere, how can we begin to gain a vantage point above and engage in healthy, virtuous motives within our own lives? One must consider the importance of an individuation process where the overbearing power of others, addictions, and codependencies is relinquished to the Zeus within. In short, too much Zeus and we have too little humanity. Too little Zeus and we have codependent and powerless lives.