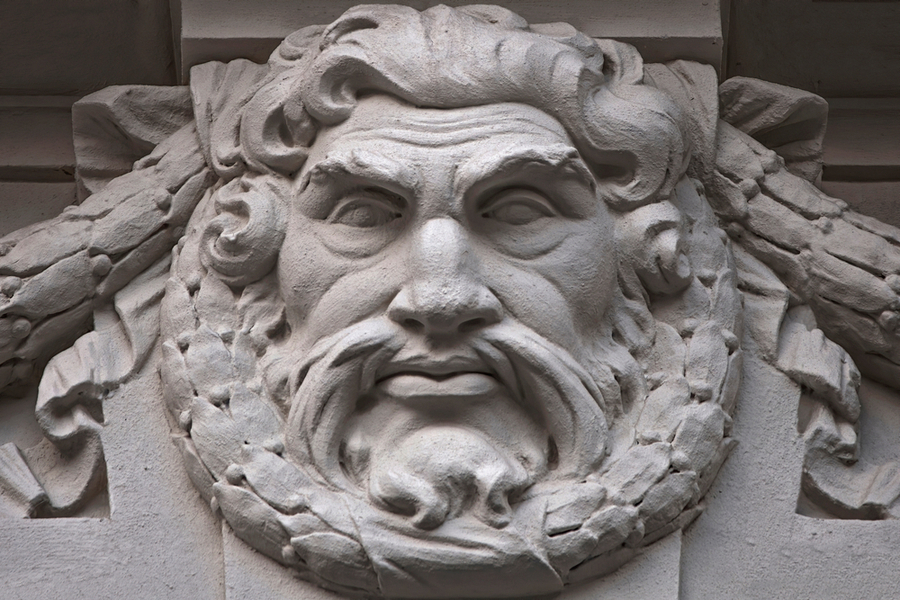 Uranus once ruled as the god of the skies. With Gaia (Mother Earth), Uranus fathered the primal forces of the universe. As strong and powerful forces, his children, the titans, held the elemental system together. And, like many fathers, Uranus reveled in his authority above the others but, in time, grew fearful. He worried that his own children would rise against him and began burying the titans deep into the earth. Gaia, out of desperation to protect her children, pleaded with several of her sons to help dethrone the power-mad father. All of the sons were cowardly but one. Cronos, best known as Saturn, agreed to hide while Uranus came to lay with Gaia. When the moment was right, Cronus struck Uranus at the base of his genitals and cast them into the seas. Graphic as the scene was, it effectively awarded Cronos the position of power over the universe.

The Wounds of the Father

As wounds of the father are so often hereditary, Cronos, too, began to fear losing his reign over his children. But instead of hiding them, Cronos aggressively begins to devour them and firmly reserves his control. Let’s consider what these stories have to say about fathering. Firstly, we can readily see the role that fear plays in the life of a father. Whether it be by a need for dominion or mere significance, the authoritative father is compelled to repress the new with the old.  Fathers may rely heavily on the “right answers” to maintain their reign. Cronos/Saturn fathering often relies on the old wisdom to confront and swallow the new imagination. However, it may rob children of the chance to explore their own identities. Rather than finding one’s own strength, like Uranus to Cronos, these dominant energies can pass along their fears and strategies to their children.

Consider that we associate Cronos with law, time, and rules. His distant and rigid manner is dry, direct, and unyielding. He is stubborn and aggressive. This is how I can best describe the Cronos aspect of the psyche. There is in each of us, and likely we can observe in our own parents, a fear-driven desire to preserve and repress change. To secure our mental health and our sobriety, pay our bills, and succeed in our lives, many will rely heavily on the inner Cronos figure. This replaces the unfolding and emotionally rich experiences of life. For example, the stoic “box-checker” in treatment may emotionlessly execute goals with minimal living connection to the human unfolding.

A Repression of Our Own Growth

Secondly, we may consider the consumption of the gods as a kind of repression of the many aspects of our own growth. Out of fear of volatile forces, the soul can become buried within swallowed emotions in the belly, churning and grumbling but held down by dry and rigid saturnian consciousness.  As a result, as our next story will demonstrate, this doesn’t work out so well for Cronos. In fact, the dry, rigid, and distant figure well preserves the gods until the new life (his own son) risks it all to save his siblings.

Zeus and the Warrior Defenders

As Cronos devours each of the gods, Zeus is protected and hidden by his mother, Rhea. Zeus, a young baby, is hidden away in caves and protected by the Minaeds. Under further research, we learn that the Minaeds resemble warrior defenders. Just as our hidden inner child has many defenders, so, too, does Zeus. To put it another way, as rigid and threatening circumstances force the inner child into hiding, it also can cause us to recruit defenses for that child. Our emotions, gifts, and individuality may be blocked by these defenders whether the threat of danger continues or not.

A Flood of Archetypal Energies

Rhea and Zeus devise a plan to offer to Cronos a poison (in one version of the myth) or a stone (in another) wrapped in swaddling cloth to consume. Rhea tells Cronos that this is Zeus and Cronos quickly devours the offering. Cronos becomes ill and throws up the entire pantheon of the gods consumed.

And you thought your family was dramatic? There is a lot going on here! Firstly, we have a sort of warning for the Cronos experience. Should we father ourselves, for example, in this dry, consumptive, and distant way, we may eventually purge the many inner figures all at once. And I don’t know about you but the idea that a flood of archetypal energies pours out all at once sure sounds like chaotic forces to me. Have you ever wondered why when you’re doing everything “right,” the chaos can come up all at once? Could it be the enacted myth Cronos?