Yin and Yang: Two Sides of the Same Coin

During our discussions of the Five Elements over the past couple weeks we have made a few mentions of the concepts of Yin and Yang, as well as Tai Chi. This week we’re going to look a little more closely at these fundamentals and how they relate to our lives. 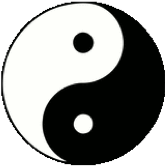 The above symbol of yin and yang is actually called Tai Chi.  Tai Chi means “the supreme ultimate reality.”

There is also a concept called Wu Chi.  Wu Chi looks like this:

It is just an empty circle, void, meaningless.  Wu chi also comes to represent chaos or non-order or the inconceivable.  It is only when this wu chi divides itself into two distinguishable poles (yin and yang) do we derive meaning, form and order

The Etymology of Yin and Yang

We gain some valuable insights into yin and yang when we examine the etymology of the words. For example, we write Yin in classical Chinese like this: 阴. We write Yang like this: 阳. The Chinese characters yin and yang are both comprised of two separate characters. The character yin has the character for moon 月 in it. The character of yang has the character of sun 日 in it.  This gives us an important clue into what these two words are meant to signify. When literally translated, yin means “the shady side of the hill.”  Yang means “the sunny side of the hill.”  We associate the yin side, or shady side, with things that are at rest, introverted, calm, receptive, passive, cold and dark. We associate the yang side, or sunny side, with activity, extroversion, excitement, unrest, creativity, chaos, action, heat and light.

An Alliance of Energies

At first glance, it might seem tempting to prefer the yang side of things. However, it needs to be said that these two opposites depend upon each other. They need each other to define their very existence. All things are relationships. What is up without down? Though our culture puts a high emphasis on activity and action, without rest and calm we will get ill and burnout. Furthermore, what does a picture of a black bear at night drawn on a black piece of paper look like? Nothing. However, if we put that picture on a white piece of paper we know instantly what it is. In other words, we need a concept of a hard day so we can appreciate a good day. We live in a world of opposites joined together inexplicably in a great mysterious union.  This forms a mutual alliance between these two seemingly opposed energies.

Breaking Down the Binaries

To see yin and yang as a type of binary structure is missing the point entirely. Yin and yang are not a duality. By duality, we refer to the way Western Culture and the English language creates a kind of opposing duality in one’s mind. Things are always good or bad, up and down, pretty or ugly, happy or sad. However, the Chinese constructed their language differently. All seemingly opposite phenomena are really different sides to the same thing. Day and night are always dependent upon each other to give the other meaning. You cannot have saints unless you have sinners. These seemingly opposing things are really united, inexplicably. Trying to live a life only on one side of this balanced equation is a formula for disaster and disease. Flowing within this inherent structure that comprises the phenomena of existence is a useful piece of advice.

As we grow, our consciousness begins to expand and subdivide in an effort to categorize our experiences. However, we should remember that everything is yin and yang. The linear mind longs to move forward – bigger, better, faster. This leads to only more confusion. Man is overworked. He builds a computer to lessen his load. However, with the spare time now available, he works harder, makes more progress, and gets tired again. A newer, better computer is invented…and on it goes. The solution is to move toward the beginning. Stop making complexity where there is none. Life is simple, easy and free for the giving. All that we need to do is step into the dark forest and realizing that there is no path, we make a path where one never existed. This is the adventure that, in effect, IS life, traveling a path rich with surprise, mystery, suffering, and joy.